Identify the figures that seem congruent. Explain why they seem so.

Answer: Figures A and F seems congruent because they have the same shape and same size.

Answer: C and D seems congruent because they have the same shape and same size.

Question 3.
The quadrilaterals below are congruent. Write the statement of congruence. 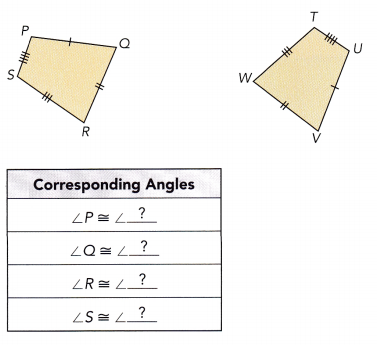 Question 4.
To make two congruent quadrilaterals, Wendy cut two pieces of cardboard, one on top of the other. She measured the lengths of some sides of the quadrilaterals.
a) Find the values of the variables x, y, and z. All lengths are in inches. 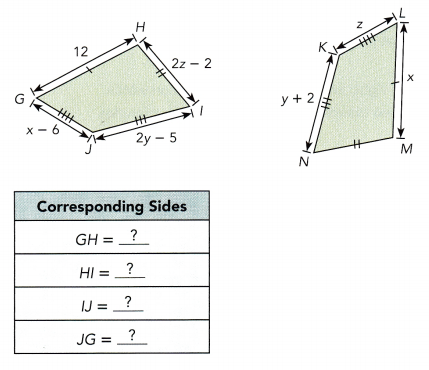 Subtract y from both sides.
y = 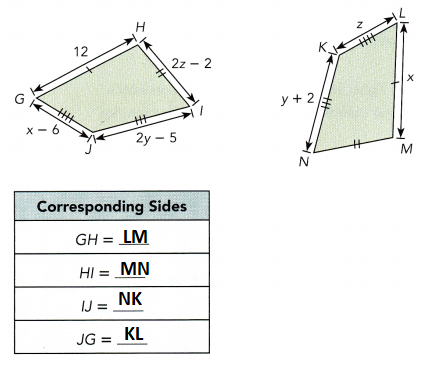 b) What is the length of each side of GHIJ? of NKLM?
GH =

OBSERVE THE CONGRUENCE IN TRIANGLES

STEP 1: Draw △ABC and △DEFso that m∠CAB m∠FDE, AB = DE, and AC = DF. Draw the two triangles such that point A is 10 units to the left of point D.

STEP 3: Repeat STEP 1 and STEP 2 for triangles with different dimensions. Which pairs of corresponding parts did you specify to be congruent? Was this sufficient to make the triangles congruent?

Math Journal How are △ABC and △DEF related in each case? What are the four sets of the minimum conditions for two triangles to be congruent?
Answer:

Question 5.
Justify whether the triangles are congruent. If they are congruent, write the statement of congruence and state the test used.
a) 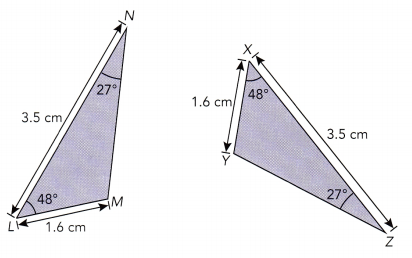 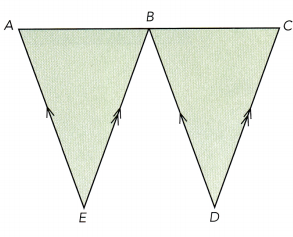 Name the figures that are congruent. Name the corresponding congruent line segments and angles.

Question 1.
ABCD is a parallelogram with diagonal \(\overline{B D}\). 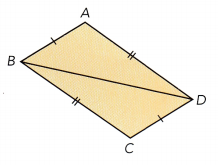 Answer: Yes the above parallelogram is congruent (△BAD ≅ △DCB).
AB = CD and AD = BC because opposite sides of a parallelogram are equal.
∠ABD = ∠CDB And ∠BAD = ∠DCB

Question 3.
WXYZ is a rectangle with diagonal \(\overline{W Y}\). Explain, using the given test for congruent triangles, why △WXY is congruent to △YZW.

Question 4.
ABCDE is a regular pentagon with congruent diagonals \(\overline{B E}\) and \(\overline{B D}\).
a) Justify △ABE ≅ △CBD with a test for congruent triangles.
Answer:
We can test whether the given figures are congruent by testing SSS, ASA, SAS, and HL.
SSS test:
AB = BC
AE = CD
BE = BD

b) Name a pair of congruent quadrilaterals. 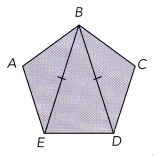 Answer: △ABE ≅ △CBD because the shape and size are equal.

Question 5.
△ABC is congruent to △PQR. Find the values of x, y, and z.

b) The pieces of fabric shown are congruent triangles. Find the value of p, q, and r.

Question 8.
The origami cornflower is formed by making symmetrical folds in a paper square. In the diagram, AB = BC = DE = EF and OA = OC = OD = OF. Write two possible statements of congruence for ABCO. 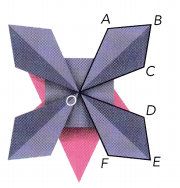 Question 9.
In making this suspension bridge, engineers connected two cables at the same point P on the concrete piers and at the same distance from the base of the concrete piers at R.
a) Which congruence test ensures that △PQR is congruent to △PSR? Explain.
Answer: SAS (Side Angle Side). Each triangle in the below figure is a right angled triangle at R and congruent with the same size and shape.

b) How many other pairs of congruent triangles are attached to each concrete pier? Explain. 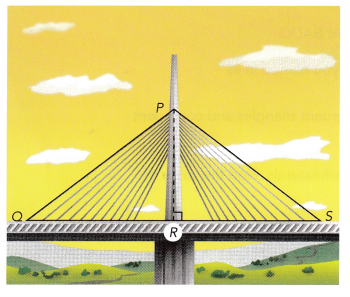 Answer: There are 10 pairs of congruent triangles that are attached to each concrete pier.

Question 10.
This skyscraper has several symmetric triangles overlaid on a grid of horizontal and vertical lines. In each direction, these lines are parallel. 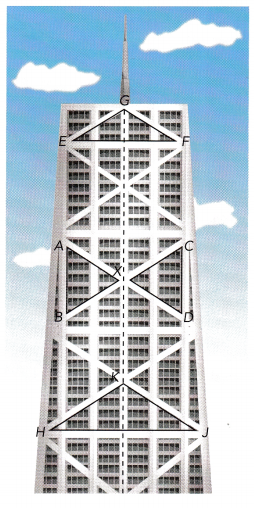 a) This face of the building is symmetric about \(\overline{G K}\), so AB = CD, AX = CX, and BX = DX. Give the statement of congruence for △ABX and tell which congruence test you used.
Answer: SSS test is used to tell whether the figure is congruent. △ABX ≅ △CDX